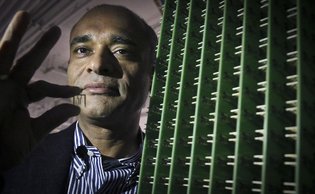 In the end Aereo’s dime-sized antennas and subscriber-specific copies of television broadcasts – its “Rube Goldberg” attempt to find a loophole that would allow it to stream TV over the Internet – were not enough to win over a majority of the Supreme Court.

On June 25, 2014, the Supreme Court held that Aereo’s streaming service violated the exclusive right of copyright owners to “publicly perform” their works. Aereo had used diabolically clever technology (or so the broadcasters claimed) in its attempt to avoid this outcome, which seems very likely to force Aereo out of business.

As I have described in detail elsewhere, Aereo’s system – which would have been unimaginable and cost-prohibitive only a few years ago – relied on thousands of antennas and massive, low-cost hard disk storage. Advances in antenna technology allowed Aereo to assign a separate micro-antenna to each paid subscriber. The plummeting cost of digital storage allowed Aereo to save a separate copy of each broadcast transmission for each subscriber that wanted to save a copy.

Aereo’s argument was that for any singe subscriber this was no different (legally speaking) than accessing a broadcast using a rooftop TV antenna connected to a DVR in the living room. In effect, Aereo claimed, each subscriber had outsourced the antenna and the remote DVR to Aereo’s central facility, and Aereo was no more than an equipment supplier.

And, Aereo argued, nothing was accessed or copied unless the consumer initiated access and decided to watch or save a show. In other words, Aereo didn’t collect TV shows and provide a ready-to-access “TV jukebox” the consumer could choose shows from, à la Netflix. If none of Aereo’s subscribers initiated a copy of the “Barney and Friends,” broadcast at 3:00 a.m. on WNET in New York (one of the plaintiffs in the case), it would never be accessed, saved or streamed by Aereo. It was the “volitional conduct” (an esoteric copyright law buzz-phrase) of the subscriber that caused a copy to be made and transmitted, just as it is the volitional conduct of a library patron that causes a photocopy of a copyrighted work to be made on a library photocopier. Aereo argued that it should be no more liable for what its subscribers do with the equipment than is a library with a copy machine on its premises (libraries are not legally responsible for illegal copying by their patrons).

Further, Aereo argued, the fact that it may have transmitted 10,000 personal copies of a World Cup soccer match didn’t constitute a public performance under the Copyright Act, since each transmission was viewed by only one subscriber, not the “public.”

These arguments were enough to persuade the Second Circuit Court of Appeals in New York (a court many lawyers view as the most knowledgeable and influential of the federal courts when it comes to copyright law), but it didn’t pass muster with the Supreme Court (although three justices dissented, agreeing with Aereo). The Court was unimpressed with the technological details that had occupied the lower courts that had ruled in favor of Aereo, observing that it “did not see how the fact that Aereo transmits via personal copies of programs” makes a difference under the copyright statute. Likewise, the Court rejected Aereo’s argument that transmitting a performance means to make a single transmission, holding that Aereo was transmitting a performance through a “multiple, discrete transmissions.”

Drawing heavily on Congress’ 1976 amendment to the copyright statute intended to bring cable TV companies within the definition of “public performance,” the Supreme Court concluded by analogy that Aereo’s “is not simply an equipment provider . . . that Aereo’s activities are substantially similar to those of the CATV companies that Congress amended the Act to reach.” And, because the fit between the 1976 law and Aereo’s technology was so imperfect, the Court was forced to fall back on what it described as the “overwhelming likeness to the cable companies targeted by the 1976 amendments” and conclude that the technological differences between Aereo and the cable companies “does not make a critical difference.”

Fundamentally, the Court focused on Congress’ regulatory objectives, and on this basis considered Aereo’s technological system of dedicated antennas and personal copies as “not adequate to place Aereo’s activities outside the scope of the Act,” a conclusion the dissent described as a “looks-like-cable-TV” (or“ guilt by resemblance”) standard that will “sow confusion for years to come” and is “nothing but th’ ol’ totality-of-the-circumstances test (which is not a test at all but merely assertion of an intent to perform test-free, ad hoc, case-by-case evaluation).”

There is no question that had Aereo won before the Supreme Court it would have been a huge upset, and the fourth estate would be doing somersaults. As it is, the outcome was largely anticipated by the small group of lawyers, academics and commentators that paid close attention to the legal arguments made by each side. While most of us prefer to see David defeat Goliath, it has always seemed unlikely that the networks’ $3 billion-plus annual licensing revenues would be weakened by Aereo or Aereo clones.

However, questions remain over what the Court’s ruling (and reasoning) will mean for the delivery of television programming, cloud computing or service-provider liability. Is the dissent correct when it warns that  it “will take years, perhaps decades, to determine which automated systems now in existence are governed by the traditional volitional-conduct test and which get the Aereo treatment. (And automated systems now in contemplation will have to take their chances)”?

The answer to these questions is, of course, that it’s far too early to tell. For better or worse, the Supreme Court was careful to emphasize that its decision was limited to the “technologically complex” system engineered by Aereo: “we cannot now answer more precisely how the Transmit Clause or other provisions of the Copyright Act will apply to technologies not before us.”  Even so, the Court was careful to note that its decision didn’t reach remote storage (“cloud locker”) services where consumers are able to store digital copies they “have already lawfully acquired.”

Nevertheless, start-ups involved in the delivery of television programming will have to ask whether they cross the line set by Aereo: are they merely an equipment provider (and not liable for direct infringement) or a cable TV look-alike that falls on the wrong side of the line between legality and illegality?

The Supreme Court did little to help companies answer this question, and there may be real concern that Aereo will discourage investment in alternatives to traditional television programming. One thing that seems certain is that any almost every investor in a television technology company will have to ask whether the business plan passes the “Aereo test,” i.e., is copyright compliant. Remote service DVR (“RS-DVR”) services, in particular, may need to reexamine the legality of their services following this decision. Commentators have already questioned whether Aereo has implications for the legality of in-line streaming and in-line linking of images, and noted that regardless of whether the answer is yes or no, the case is likely to raise litigation costs, and thus indirectly chill innovation.

With respect to non-broadcast TV content — for example, the “cloud computing industry” and “cloud lockers” that were the subject of concern expressed by some Justices during oral argument before the Court — it seems unlikely that there will be any implications, at least in the short term, for the reasons described in my post titled Aereo and the Cloud Before the Supreme Court, written just before the Supreme Court decision was issued. Most cloud services provide access to content they own or license, or store files that consumers have already lawfully acquired, a practice the Supreme Court noted was not impacted by its decision. And, cloud services that host third-party content are largely protected (although not entirely) by the Digital Millennium Copyright Act.

However, copyright law inevitably lags technological development, creating a seemingly never-ending state of uncertainty over how the law will be applied to new technologies. Indeed, Aereo itself illustrates this – the Supreme Court was called on to apply a statute enacted in 1976 to a technology that could not have been envisioned by Congress until decades later. What unintended consequences Aereo might have for innovation and investment in content-delivery and content-storage technologies yet to be invented or imagined is anyone’s guess.