With some exceptions, every public venue that plays popular music for its customers – concert venue, bar, restaurant, shopping mall or health club – needs to enter into a blanket license agreement with ASCAP, BMI and SESAC, the performing rights organizations (PROs) that pay public performance royalties to songwriters and publishers.

Occasionally a club will fail to join a PRO, ignore warnings and be sued for copyright infringement.

Here’s a current example in which a club did sign a license with ASCAP,  but allegedly failed to pay ASCAP the license fees.

Two music publishers have sued Calvin Theater and its owner/manager, Eric Suher, for violating public performance rights in six compositions. Calvin Theater is a music venue in Northampton, Massachusetts, and the suit was filed in the Federal District Court for the 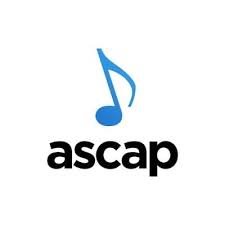 District of Massachusetts. ASCAP manages the public performance rights for these songs.

We don’t know why Calvin Theater failed to pay ASCAP. However, the publishers’ claim is that because the venue is in breach the agreement is not in effect and the Theater has no copyright license.

Based on the allegations in the complaint this case is a good opportunity to do a short tutorial on the the intersection of the music industry and copyright law.

Calvin Theater involves the public performance of musical compositions – there is no allegation that sound recordings were illegally copied. The complaint doesn’t identify the owner of the sound recordings, nor does it need to do so.

The complaint doesn’t provide any detail about how the compositions were performed. Were the works performed by a live band? Did the Calvin Theater play a CD or stream the songs? Were the songs played over a radio? Which versions of the songs were played – the originals or cover recordings? The complaint doesn’t tell us, but it doesn’t matter – regardless of how the songs were played, the owners of the copyrights in the musical compositions are entitled to a public performance royalty. The music club should have paid that through a contract with ASCAP.

What Is The Right of Public Performance?

One of the exclusive rights held by owners of musical compositions is the right to publicly perform a work. The Copyright Act defines public performance broadly – “to perform … at a place open to the public or at any place where a substantial number of persons outside of a normal circle of a family and its social acquaintances is gathered.”

If a public venue plays popular music for its customers, it needs a public performance license. If it plays music and doesn’t have one, it’s a copyright infringer.

If you’re you’re wondering about the public performance rights of owners of sound recordings – they don’t have one, except for digital audio transmissions.17 U.S. Code § 106

What Are Publishing Companies?

The plaintiffs in this case are publishing companies. What’s that, you ask?

A lot of composers don’t have the time or inclination to deal with the music business. Instead, they assign ownership of their compositions

to a publishing company to manage. There are many publishing companies, and the largest own publishing rights to thousands of songs. Two large publishers are the two plaintiffs in this case – Universal Music Publishing and Primary Wave.

What Are Performing Rights Organizations?

The owners of compositions – whether publishing companies or the composers themselves – can’t track and police the thousands of public venues where their compositions may be performed. A complex system has evolved to deal with this –  they register their compositions with one of the PROs – ASCAP, BMI or SESAC. In turn, the PROs enter into blanket license agreements with the clubs and restaurants.

It’s even more complicated than it sounds. For a deeper dive see Songtrust’s “Modern Guide to Music Publishing.“

The two plaintiffs in this case allege that they are owners of the six compositions that have been infringed. From this we know that the composers have transferred ownership of the compositions to these companies. The publishers must be either owners or exclusive licensees

to bring a copyright infringement lawsuit.

Both publishers are members of ASCAP. In order to avoid infringing the compositions of these songs, Calvin Theater needed to enter into a blanket license agreement with ASCAP and not breach the agreement.

The Owner of the Club May be Personally Liable

The complaint alleges that Eric Suher is an owner, officer and director of Calvin Theater, that he controls, manages and operates the company that owns the club, and that he has the right and ability to supervise and control the public performance of musical compositions at the club.

This is important – in my experience many lawyers and business owners don’t realize that a corporation may not shield a business owner or manager from personal liability for copyright infringement. For details on why this may be the case, see Redigi – Did Ossenmacher Know He Was Risking Personal Liability?

If the publishers win their case Suher and Calvin Theater may be jointly and severally liable for copyright infringement.

The Works Are Registered

To bring a claim of copyright infringement a work must be registered. This was uncertain until 2019, when the Supreme Court decided Fourth Estate Public Benefit Corp. v. Wall-Street.com, LLC. Before that some courts held that a pending registration was sufficient.

Here the publishers provided the registration numbers and dates for each registration. The compositions were initially registered in the The Publishers Are Seeking Statutory Damages

The publishers don’t want actual damages (their lost profits) or the club’s profits attributable to the infringement – these are probably minimal. The publishers have asked for statutory damages of between $750 and $30,000 per infringing work.

Because the registrations preceded the infringements (which took place in 2022), they are entitled to seek statutory damages and, at the discretion of the judge, attorney’s fees.

However, the amount they are seeking is worth questioning – when an infringement is “willful” statutory damages may be as high as $150,000 per work infringed – in this case that would total $900,000. The publishers allege that ASCAP repeatedly told Calvin Theater that it was infringing and demanded that the Theater pay the contractual license fees. It’s not clear why the publishers are not seeking $150,000 per work based on what appears, at least for pleading purposes, to have been willful infringement.

That said, statutory damages are complicated. This table illustrates the options, depending on whether an infringement is “innocent,” “regular” or “willful”: 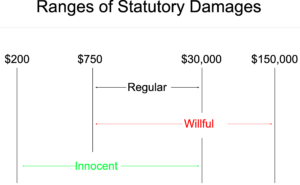 If the allegations are true this is a straightforward case. It illustrates the elements of a copyright case in the music industry, and how much trouble a public venue can get into by ignoring the requirement that it license rights from the performing rights organizations if it’s going to play popular music.

However, music publishers are not in business to force music venues into bankruptcy.  Most likely Calvin Theater’s  lawyers will tell their client that it should settle, and the publishers will accept reasonable terms.  I’ll keep an eye on the case and update this post if that happens.