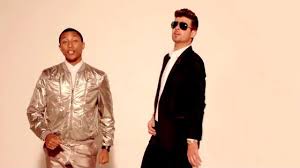 Blurred Lines At The Ninth Circuit

Copyright law is confusing, but music copyrights take it up a notch. Often, judges and jurors with no background in a music genre are asked to determine whether two works are “substantially similar” after being subjected to esoteric analysis by musicologists who present arguments that even a trained musician might find hard to follow.

However, whether Pharrell Williams and Robin Thicke’s 2012 recording of “Blurred Lines” infringes Marvin Gaye’s 1976 composition of “Got To Give It Up” presents issues of copyright law that are challenging even by the arcane standards of music copyright law.

A quick recap: in 2015 a California jury found that Pharrell Williams and Robin Thicke’s (“Williams”) recording of Blurred Lines infringed the copyright in the composition of Got To Give It Up, and awarded Marvin’s Gaye’s heirs over $7 million in damages. The judge reduced this damages award to $5.3 million, but awarded a “running royalty” of 50% of future songwriter and publication royalties, which over time could be millions more.

After losing the jury trial Williams and Thicke appealed to the Ninth Circuit Court of Appeals, which heard oral argument in October 2017.

The copyright and music communities have been entranced by this case, and there are strong opinions on both sides. How will the Ninth Circuit rule? What arguments did the parties make that will determine the outcome of the appeal?

One way to answer these questions is to read the hundreds of pages of dense legal briefs Williams and Gaye filed with the Ninth Circuit. However, because the Ninth Circuit releases videos of oral arguments (on Youtube, no less) an easier alternative is to watch the video. The parties had only 30 minutes each to make their case, so they were forced to cut the chaff and argue the issues that are most important to their cases. All-in-all, watching the oral argument can be more edifying (and a lot less time consuming) than reading the briefs.

In this case oral argument is particularly interesting for two reasons: first, both sides were represented by preeminent appellate lawyers, two of the best in the country, so the arguments of the parties are well-articulated. Second, the oral argument makes it clear that the appeal may turn on one key issue: in a case claiming infringement of a musical composition created before sound recordings became protected by copyright, is the copyright limited to the sheet music? Or, may the copyright owner go beyond the sheet music deposited with the copyright office and play for the jury a contemporaneous sound recording of the composition?

First, some background on this issue.

It has long been a requirement that to register a copyright a copy of the work be deposited with the Copyright Office – the so-called “deposit copy.”

However, pre-1978 the Copyright Act did not protect sound recordings, only musical compositions. Gaye wrote Give It Up in 1976 and registered the sheet music for the composition, which was little more than a sketch of the melody, lyrics and chords (a “lead sheet”). But, he did not register his recording of the song. Indeed, since sound recordings were not protected the Copyright Office would not have accepted a deposit of the recording.

At the trial of this case, there was never any question that the jury would hear Blurred Lines, the allegedly infringing work. But as the case developed leading up to trial, a hotly contested issue was whether Gaye’s heirs should be limited to the lead sheet of Give It Up, or whether they could also play the recording for the jury.

The trial judge sided with Williams on this issue – he held that the scope of Gaye’s copyright was defined by the sheet music deposit filed with the Copyright Office 40 years earlier. This led to the surprising fact (widely commented on during the trial) that Gaye was never allowed to play Give It Up for the jury.

However, trial are messy, and despite this ruling, during trial (according to Williams), the judge allowed Gaye’s music experts to testify about the sound recording and play musical excerpts based on parts of the sound recording that were not present in the sheet music.

At oral argument before the Ninth Circuit it quickly became clear that whether this was permissible would be the focus of the hearing. Williams’ lawyer argued that the deposit copy (the sheet music submitted to the Copyright Office) strictly defines the scope of the copyright. In other words, Gaye’s copyright is defined, note for note, by the sheet music. Because the judge let Gaye go beyond the sheet music, she argued, the court should order a new trial.

The lawyer for Gaye’s heirs argued that the deposit copy does not define or limit the scope of the copyright in the composition. The best evidence of the composition, she argued, is the studio recording of Give It Up. Therefore, even if the jury did hear evidence present in the sound recording but not in the sheet music, the jury verdict should stand.

Gaye’s lawyer also argued that an expert can testify to what is “implied” in the sheet music –  the sheet music deposit can be “interpreted” based on what would be understood by a knowledgeable musician.  And, the sound recording may be relevant to that interpretation. Therefore, to the extent that Gaye’s music expert went beyond the sheet music “note for note,” this interpretation was permissible.

The problem, for the lawyers and the judges at the hearing, is that there appear to be no clear precedents to help determine which view of the law is correct. No court has squarely addressed this issue, and there is no legislative history to guide the Ninth Circuit judges.

It’s difficult to predict how the Ninth Circuit will resolve this issue, assuming they address it at all. Gaye’s lawyer had a “Plan B” argument that she stressed to the court, which is that even if the court accepts Williams argument regarding the limiting scope of the deposit copy, Gaye’s expert provided enough evidence for the jury to find in favor of Gaye based on the sheet music alone, without any evidence from the recording. Courts often will usually take the easier of two routes to a decision, so the Ninth Circuit may be able to avoid the issue that attracted most of the time and attention at the hearing by accepting this alternative argument.

However, if the Ninth Circuit does address the relevance of the sound recording to the pre-1978 composition, it will be an important copyright law precedent. There is a large catalog of pre-1978 music that is potentially subject to infringement claims, and the likely success of those claims will be viewed in light of the Ninth Circuit’s holding in this case.

If the Ninth Circuit does uphold the jury verdict in favor of Gaye, I wouldn’t discount the likelihood that Williams and Thicke will seek review by the Supreme Court. $5.3 million is a lot of money, and 50% of the future royalties for Blurred Lines is likely to increase that number substantially. The unusual issue of copyright law at the heart of this case could induce the Supreme Court to accept an appeal of this case.

Lastly, a discussion of the Blurred Lines case would be incomplete without a mention of Skidmore v. Led Zeppelin, in which the heirs of Randy Wolfe (aka Randy California), asserted copyright infringement of  the 1967 Spirit song “Taurus” in the opening notes to “Stairway to Heaven.” That case was tried in federal court in California in 2016, and resulted in a jury verdict of non-infringement for Led Zeppelin, the opposite result to Blurred Lines. The judge in that case held that Wolfe’s case would be limited to the pre-1978 deposit copy, and refused to allow Wolfe to play the sound recording of Taurus for the jury. He appears to have been more strict than the judge in Blurred Lines in refusing to allow Wolfe’s expert to provide any interpretation of the sheet music.

Update: The Ninth Circuit issued its decision on March 21, 2018, upholding the jury verdict. The court did not decide the question of whether Gaye’s evidence should have been limited to the deposit copy, instead deciding the case under what I describe above as Gaye’s “Plan B.” The court stated:

The parties have staked out mutually exclusive positions. The Gayes assert that Marvin Gaye’s studio recording may establish the scope of a compositional copyright, despite the 1909 Act’s lack of protection for sound recordings. The Thicke Parties, on the other hand, elevate the deposit copy as the quintessential measure of the scope of copyright protection. Nevertheless, because we do not remand the case for a new trial, we need not, and decline to, resolve this issue in this opinion. . . . Both experts referenced the sound recording. Both experts agreed that sheet music requires interpretation. The question of whose interpretation of the deposit copy to credit was a question properly left for the jury to resolve.

Second Update: The case was reheard en banc, and the jury’s verdict in favor of Led Zeppelin was upheld. Link