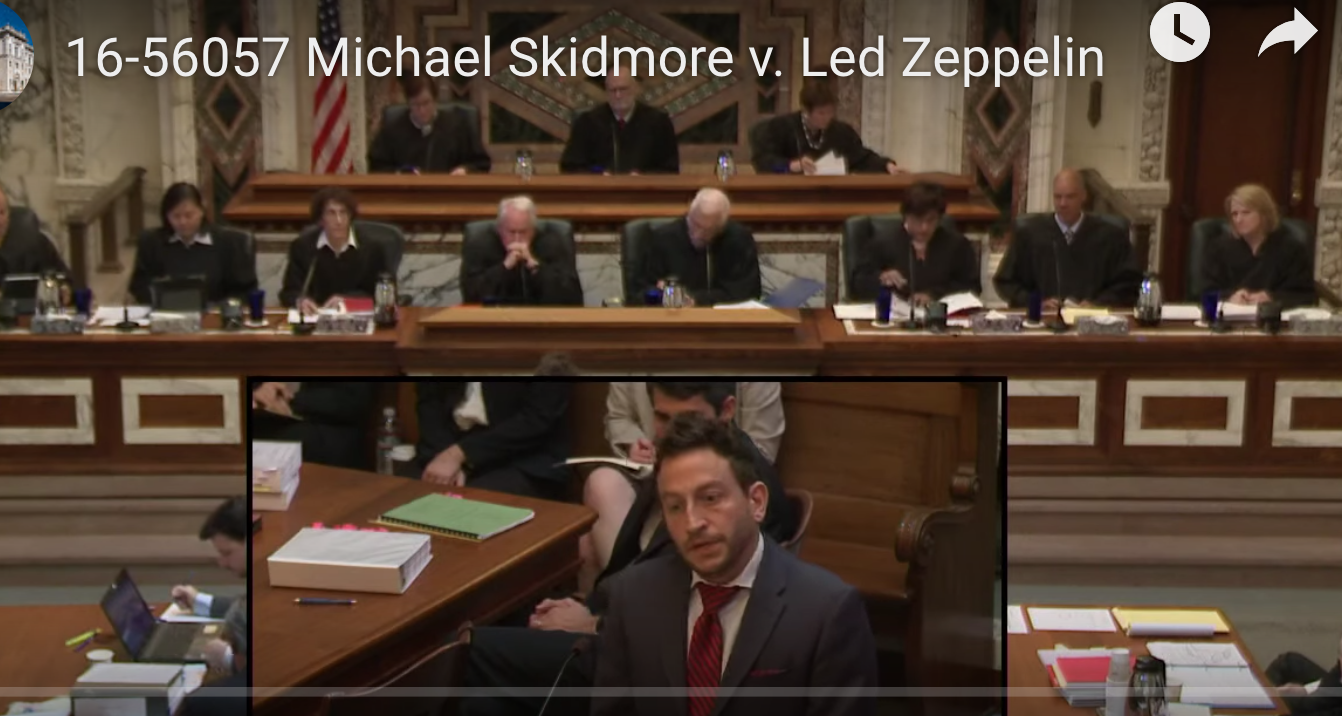 I have a few observations on the Ninth Circuit September 23, 2019 en banc hearing in Skidmore v. Led Zeppelin. Video of the oral argument is embedded at the bottom of this post, and the transcriptions below are mine – I’ve left out a few words here and there to make this easier to read, but I didn’t leave out anything material.

Did Skidmore’s Attorney Give Away the Case?

Here are the key excerpts from the oral argument. (I’m labeling all of the judges’ questions as simply “judge,” but the questions were posed by different judges):

Judge: Are you conceding today that if you are confined to the deposit copy your copyright claims are not viable?

Skidmore Counsel: I think that it is very difficult for plaintiff to win based on the deposit copy since it’s such an inaccurate transcription of the composition ….

Skidmore Counsel: Yes, I think that is the reality of the situation.

Judge: When you listen to these two recordings, the deposit copy and the performed copy by Led Zeppelin, I don’t see how any juror could find they’re substantially similar, even with expert testimony. So you’ve got to get your sound recording in to win this case, don’t you? . . .

Judge: If the law is that the deposit copy is the four corners of the copyright deposit there’s nothing else to retry, correct?

Skidmore Counsel: If that’s the law ….

Judge: And you lose the case unless [the jury hears the sound recording]; a hundred times out of a hundred, right? You’ve gotta get your sound recording in in order to win this case, don’t you?

Skidmore Counsel: I think so.

Later in the hearing, when Led Zeppelin’s attorney was arguing:

Judge: It seems to me that assuming the copyright analysis is limited to the deposit copy any error [in the jury instructions] is harmless because no reasonable juror could find that the alleged copying was unlawful appropriation of the deposit copy, so why could we assume that instructional error occurred and find any error harmless?

The problem here, from Skidmore’s perspective, is that the judges appeared unconvinced that the sound recording of Taurus should be admissible.

This sets up the scenario (referenced by the judge in the quote above) where the en banc court would not need to address the jury instruction issue that was grounds for reversal by the Ninth Circuit panel, and which at least one judge indicated was problematic. The court can bypass that as “harmless error.”

Whether the Ninth Circuit will take this easy way out remains to be seen, but it seems like a significant risk for Skidmore.

By the way, I’m being facetious when I ask whether Skidmore’s attorney “gave away the case.” As a strategic matter he may have had no choice. He may have concluded that he cannot win a retrial on the deposit copy (he lost the first trial when limited to that evidence), and he doesn’t want a remand on a technicality such as deficient jury instructions if he will be limited to that evidence.

The inverse ratio rule provides that if the plaintiff establishes a high degree of access to its work by the defendant, a finding of copyright infringement may be based upon a lesser degree of similarity. This controversial doctrine exists only in the Ninth Circuit. The trial judge refused to give the jury an inverse ratio instruction, an issue Skidmore raised on appeal.

This doctrine may already be dead as a practical matter. In the 2018 Blurred Lines case (Gaye v. Williams) the original opinion suggested that there was some validity to this doctrine, and asked the trial court to reevaluate it on remand.1 But the Ninth Circuit issued an amended opinion deleting all references to the rule, arguably implying that it did not endorse it.

At the en banc hearing, one of the judges asked Led Zeppelin’s lawyer to address this doctrine, and the lawyer briefly explained why it was bad copyright law (a view widely shared in the copyright community). Quite possibly, this case will allow the Ninth Circuit to put this much-criticized doctrine to bed, once and for all.

As I discussed in some detail recently (Copyright Office Backs Led Zeppelin In Ninth Circuit En Banc Appeal), the United States filed an amicus brief urging the court to adopt a “virtually identical” test for musical works that contain only “a small number of standard elements” (as is the case with Taurus, they argued).

An attorney from the Department of Justice argued for the United States at the hearing, and frankly he didn’t push this issue as hard as he might have. He certainly didn’t propose a rule that the Ninth Circuit could adopt, and the judges appeared unreceptive to this argument. I’d be surprised if a new copyright rule establishing a thin copyright for some musical works came out of this case.

Courts are notorious for creating the wrong impression during oral argument. Many a lawyer has walked out of a hearing after getting knocked around by a judge thinking that she had lost, only to win when the ruling arrives. And vice versa.

With that caveat, I will venture a prediction that the Ninth Circuit will hold that (a) the copyright in pre-1978 works is limited to the deposit copy, and (b) Skidmore can’t prevail on the deposit copy. Accordingly, any errors in the jury instructions were harmless and the jury verdict of non-infringement is affirmed.