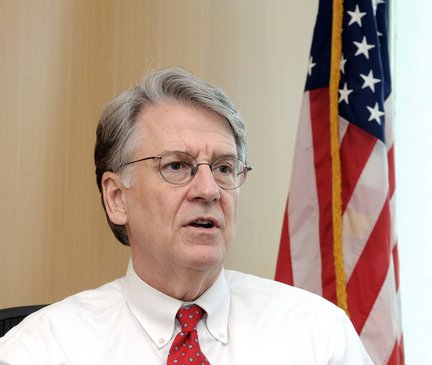 What Happens When You Get A Federal District Court Judge Really, Really Mad In a Civil Case

I haven’t written a post that falls in the “what were they thinking” category for quite a while, but you don’t see this very often.

In Angiodynamics v. Biolitec AG Massachusetts federal district court judge Michael Ponsor (pictured left) entered a preliminary injunction forbidding the defendant from entering into a merger with its German subsidiary corporation, so as not to put the company’s assets outside the reach of the plaintiff. In addition to corporate defendants, the corporate defendant’s CEO, Wolfgang Neuberger, was named as an individual defendant.

The injunction order was appealed, and the First Circuit upheld the injunction. The defendant then went forward with the merger in direct violation of the court’s order.

When Judge Ponsor received the plaintiff’s motion for contempt he ordered that Mr. Neuberger appear at the hearing on that motion. Neuberger declined to attend on the grounds that he was “afraid that the Court may . . . incarcerate him.”

Based on my experience with Judge Ponsor, he is a relatively easy-going, patient judge (as federal judges go). Not in this case. In response to the plaintiff’s motion for contempt he wrote that the defendant violated the injunction “in every way it could be violated: text, substance, spirit, body, and soul.” Judge Ponsor has been on the federal bench for 25 years. He wrote that the defendants’ conduct “constitutes the most flagrantly offensive violation of a court order that this court has personally encountered.”

Judge Ponsor entered an order that, in its severity, is unprecedented in my experience:

First, he ordered that a warrant be issued for the arrest of Wolfgang Neuberger. He stated that “the court asks the marshals to do everything possible to ensure that the warrant is effectuated internationally and Neuberger is brought to stand before this court.” This warrant is not to be taken lightly. In 2012 the U.S. Marshall Service arrested 36,200 federal fugitives. The Marshall Service “sees to it that there is no safe haven for criminals who flee the territorial boundaries of the United States.” Germany will not extradite a German citizen to the U.S. for criminal prosecution, but Neuberger is subject to arrest in many other countries that do have extradition treaties with the U.S.

Second, he ordered that the defendants be fined as follows: $1 million on May 10; $2 million on June 1; $4 million on July 1; $8 million on August 1 and on the first of each month thereafter. These fines will continue until the merger is reversed and the status quo ante restored. Likewise, only then will Mr. Neuberger be released from prison (assuming he is apprehended).

In the meantime, the fines ordered by Judge Ponsor will continue to accumulate unless and until the merger is reversed. Whether the plaintiff will be able to enforce those fines in Germany is an open (and doubtlessly difficult) question.  However, a judgment against Biolitec (whether to enforce the fines or, perhaps, a default judgment) would be a serious obstacle to the company ever selling products (lasers and laser delivery systems) in the U.S. in the future, since the plaintiff could attach or trustee process any monies owed to Biolitec by an entity in the U.S.

Bottom line, Biolitec should reverse that merger post haste. What were they thinking?