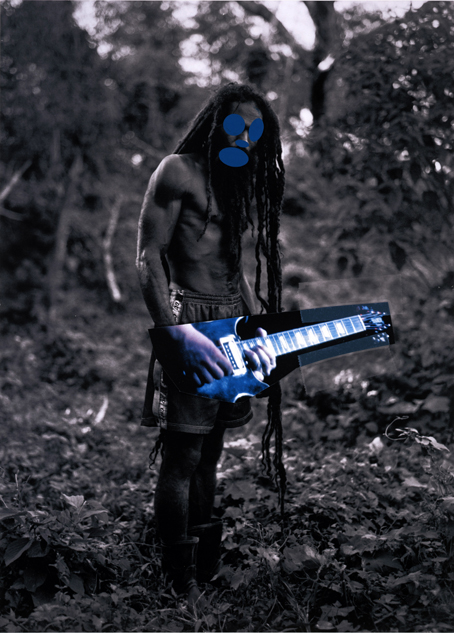 Assume I were to take a well-known, in-copyright work of art, modify it in a variety of ways and publish the results as a coffee table book. To make this thought experiment easy, assume that the Statute of Liberty is covered by a U.S. copyright registration today—in fact, the Statue of Liberty was registered with the U.S. Copyright Office in 1876, but its registration has long-since expired. Assume I took 30 photographs of the Statue and published my book with the images modified in various ways. For example, I created collages, altered the face of the Statue and superimposed various objects on the Statue. Instead of holding a torch and a tablet, in one picture she is holding a photo of the head of Osama Bin Laden, and in anther she is holding a day-glo image of the World Trade Center buildings. In some cases I used only parts of the Statue, and in others I painted objects that obscured the face. You get the idea.

Would the sculptor be able to assert copyright infringement, or would my book be protected by the copyright doctrine of fair use? The legal question, more precisely, would be: is my use of the Statue sufficiently transformative to qualify as fair use?

An issue like this faced the Second Circuit Court of Appeals in a much-watched case, Cariou v. Prince. The court released its decision last

Thursday, reversing a Southern District of New York District Judge’s decision that 30 images copied from Patrick Cariou’s Yes Rasta book of photographs of  Rastafarians in Jamaica and modified and recontextualised  by “appropriation

artist”* Richard Prince were not covered by the fair use defense to copyright infringement. The district court’s rationale for rejecting the fair use defense was that Prince’s works (contained in a collection entitled “Canal Zone”) `did not comment on, or critically refer back to, Cariou’s original works. The Second Circuit rejected this reasoning, holding that “the law imposes no  requirement that a work comment on the original or its author in order to be considered transformative.”

*”Appropriation art” refers to taking photographs and other images that others have produced and incorporating them into paintings and collages that the appropriation artist then presents, in a different context, as his own.

The Second Circuit’s reversal of the district court did not come as great surprise. Prince had a seemingly strong argument that the district court had  ignored established fair use principles, and had issued an injunction ordering the destruction of Prince’s works without weighing any of the free speech interests at issue. Nevertheless, the case is likely to be viewed as an important precedent in the area of fair use as applied to appropriation art. The heart of the court’s rational was stated as follows

[O]ur observation of Prince’s artworks themselves convinces us of the transformative nature of all but five, which we discuss separately below. These twenty-five of Prince’s artworks manifest an entirely different aesthetic from Cariou’s photographs. Where Cariou’s serene and deliberately composed portraits and landscape photographs depict the natural beauty of Rastafarians and their surrounding environs, Prince’s crude and jarring works, on the other hand, are hectic and provocative.

The court found that the the “composition, presentation, scale, color palette, and media are fundamentally different and new compared to the

photographs, as is the expressive nature of Prince’s work.” The court stated that “[T]he fair use determination is an open-ended and context-sensitive inquiry.” If the original work “is used as raw material, transformed in the creation of new information, new aesthetics, new insights and understandings – this is the very type of activity that the fair use doctrine intends to protect for the enrichment of society.”

The Second Circuit concluded that 25 of the 30 Prince images were transformative as a matter of law, requiring no further fact finding (and no trial) on remand. It sent five pictures back to the lower court judge to decide whether they violated Cariou’s copyrights under the legal standard set forth in the opinion. One of the judges on the three-judge panel dissented from the majority’s decision to assess the transformative nature of some of Prince’s works, but not others, and argued that all of the works should be remanded to the district court for analysis under the proper legal standard.

Of course, the key question in cases involving “appropriation art” is how a judge or jury is to determine whether the appropriated work is sufficiently transformative. The “gray area” in cases of this sort can be large, and highly subjective. What one judge or jury may conclude is transformative, another may not, making it difficult to eliminate all risk when publishing works of this sort. Judges and juries who may have little of no art experience will be asked to make judgments as to whether a piece of appropriation art uses a sufficiently “different aesthetic” or  whether it is something “new and different” than the original work. Moreover, the willingness of the Second Circuit to decide the issue of fair use as to 25 of the 30 works without providing Mr. Prince with a jury trial may encourage trial judges to decide appropriation art cases on summary judgment, adding to the trend away from jury trials in copyright cases.

[The images on this web page are from Richard Prince’s work, “Canal Zone.” All photos at issue in the case, both the originals and the “transformed” works by Richard Prince, are available on the Second Circuit website, here.]