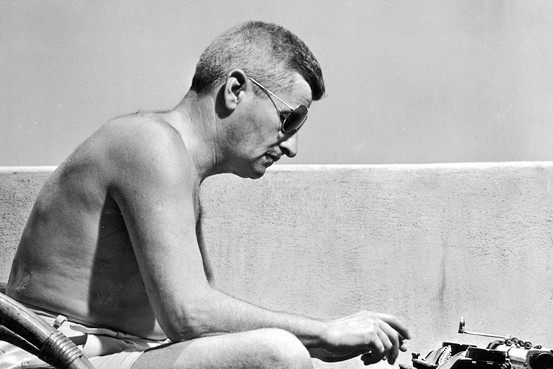 Things are Settling Back Down in Yoknapatawpha County

“It was as though she realised for the first time that you – everyone – must, or anyway may have to, pay for your past; the past is something like a promissory note with a trick clause in it which, as long as nothing goes wrong, can be manumitted in an orderly manner, but which fate or luck or chance, can foreclose on you without warning.” Requiem for a Nun, William Faulkner

For many years the Estate of James Joyce was infamous for its use of copyright law to restrict what many people considered fair uses of  Joyce’s works. Now that most of Joyce’s works are in the public domain, it seems that the owner of William Faulkner’s copyrights, Faulkner Literary Rights LLC (“Faulkner”, is stepping up to take its place. But in the “Midnight in Paris” case you’ve gotta wonder: what the heck was Faulkner thinking?

Even many people who have never read a word of William Faulkner will recognize these famous lines: “the past is never dead. It’s not even past.” These words are spoken by the fictional County attorney Gavin Stevens in Faulkner’s novel Requiem of a Nun.

The production of a Hollywood movie oftenrequires the producer to obtain many copyright permissions. However, when Woody Alan’s Midnight in Paris was released in 2011, one of the characters paraphrased these lines from Faulkner. When the protagonist, Gil (played by Owen Wilson) accuses his wife, Inez (played by Rachel McAdams) of having an affair she asks him where he got that idea. He responds that he got the idea from Hemingway, Fitzgerald, Gertrude Stein and Salvador Dali, a response that Inez ridicules because they are all dead. In response, Gil quotes Faulkner: “The past is not dead. Actually, it’s not even past. You know who said that? Faulkner, and he was right. And I met him too. I ran into him at a dinner party.”

The producers of Midnight in Paris may have tried and been denied the right to use these words, or they may not have tried at all, concluding that the use was too minimal, and too transformative, to require a license. Regardless, after the movie appeared Faulkner sued Sony Pictures Classics Inc. in federal court in Mississippi alleging, among other things, copyright infringement. On July 18, 2013 the case was dismissed based on the fair use doctrine. Faulkner Literary Rights LLC v. Sony Pictures Classics Inc.

The federal judge who drew this case, Judge Michael P. Mills,* did his level best to address the Faulkner estate’s case with a straight face, and wrote an opinion that would do any college English major proud. However, he gave himself away when he commented, “how Hollywood’s flattering and artful use of literary allusion is a point of litigation, not celebration is beyond this court’s comprehension.”

*Judge Mills is a graduate of the University of Mississippi and has lived in Mississippi for more than 30 years, although there’s no reason to think he’s ever visited Yoknapatawpha County.

Predictably to everyone except Faulkner, Judge Mills found the movie’s use of the quote highly transformative, a key factor in determining whether a copy qualifies as fair use. The heart of the court’s decision is captured in this quote:

The speaker, time, place, and purpose of the quote in these two works are diametrically dissimilar. Here, a weighty and somber admonition in a serious piece of literature set in the Deep South has been lifted to present day Paris, where a disgruntled fiancé, Gil, uses the phrase to bolster his cited precedent (that of Hemingway and Fitzgerald) in a comedic domestic argument with Inez. Moreover, the assertion that the past is not dead also bears literal meaning in Gil’s life, in which he transports to the 1920’s during the year 2011. It should go without saying that this use is highly distinguishable from an attorney imploring someone to accept responsibility for her past, a past which, to some extent, inculpates her for the death of her child. Characters in both works use the quote for antithetical purposes of persuasion. On one hand is a serious attempt to save someone from the death penalty, and on the other is a fiancé  trying to get a leg up in a fleeting domestic dispute. The use of these nine words in Midnight undoubtedly adds something new, with a further purpose or different character, altering the first with new expression, meaning, or message.

In addition to its claim of copyright infringement, Faulkner alleged

violation of the Lanham Act. Faulkner claimed that the film would “deceive or confuse viewers as to a perceived affiliation, connection or association between William Faulkner and his works on the one hand, and Sony, on the other hand.” The proposition that the use of this Faulkner quote in Woody Alan’s movie would confuse viewers as to a perceived affiliation between Faulkner and Sony is, if not an insult to the intelligence of Americans, certainly an insult to the New Yorker(ish) fans of Woody Alan. The judge denied this claim out of hand.

What was Faulkner thinking when it filed this case?

Bonus content 1 – Letter in which William Faulkner quite his job with the U.S. Postal Service:

As long as I live under the capitalistic system, I expect to have my life influenced by the demands of moneyed people. But I will be damned if I propose to be at the beck and call of every itinerant scoundrel who has two cents to invest in a postage stamp.

This, sir, is my resignation.

Bonus content 2 – A couple of days after this post was published the Wall Street Journal published an extensive article on Faulkner’s attempts to capitalize on William Faulkner’s estate, including an unsuccessful attempt to sell Faulkner’s 1949 Nobel Prize medallion. The article discusses similar efforts by the estates of Hemingway, Fitzgerald, Joyce and Nabokov.
← Previous Post Next Post →