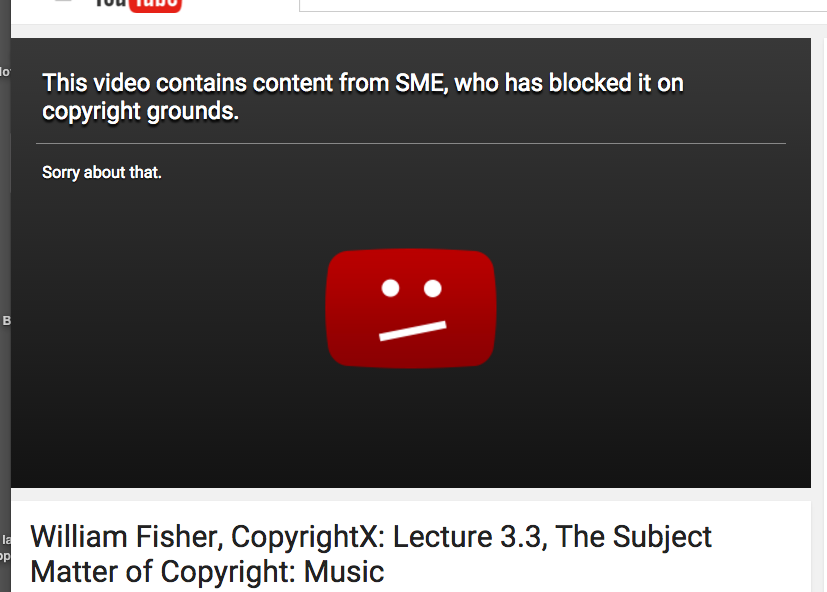 I’m privileged to be a CopyrightX teaching fellow this year, and this week CopyrightX met the real world – in the form of an encounter with Sony Music and the DMCA. Professor William Fisher’s CopyrightX lecture 3.3, The Subject Matter of Copyright: Music, contains audio clips of Bob Dylan’s All Along the Watchtower played by Dylan, Hendrix and Stevie Ray Vaughn. The course is making the point, with musical illustrations, that U.S. copyright law allows cover versions, so long as the artist making the cover pays the required compulsory license, and, that the cover version can depart quite significantly from the “fundamental character” of the original.

Unsurprisingly, Youtube’s automated ContentID system, cannot distinguish fair use from illegal use. Presumably, a “put back” notice will resolve this little contretemps.

This is not the first time a Harvard law professor has been the subject of a DMCA takedown of an educational fair use.  See my August 2013 post, Liberation Music Throws Lessig a Meatball Pitch in “Lisztomania” DMCA Takedown Suit.