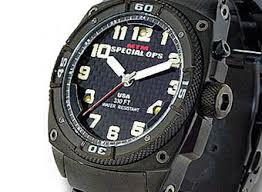 [Note: The decision discussed below turned out to be short-lived.  On October 21, 2015, less than three months after its publication dated, the decision was withdrawn and a new opinion was issued, upholding the district court’s ruling that Amazon’s search results did not violate the Lanham Act. ]

In an unusual decision the Ninth Circuit Court of Appeals has held that the Amazon search results page for an “MTM Special Ops” watch — a product Amazon does not sell — has the potential to violate the Lanham Act. The Ninth Circuit reversed a decision holding to the contrary by the Federal District Court for the Central District of California, and remanded the case for trial.

MTM’s dealer agreements prohibit them from selling to Amazon, and MTM does not sell to Amazon directly. However, at issue were Amazon search engine results obtained when consumers searched for MTM’s Special Ops watch on Amazon. While Amazon was unable to offer its customers Special Ops watches, it brought them to a page displaying watches by MTM competitors such as  Luminox and Chase-Durer.

MTM sued Amazon, but this was not a case of trademark infringement in the conventional sense – instead, of claiming that Amazon illegally used MTM’s trademark, MTM alleged that when consumers searched for MTM watches on Amazon, Amazon illegally misled them by merchandising competitive watches.

The district court dismissed the case, holding that the search results page made it unlikely that consumers would think the watches displayed were associated with the MTM watch.

The Ninth Circuit disagreed, holding that even if consumers realized that the watches featured by Amazon in place of the MTM watch were not Special Ops watches before making a purchase, Amazon’s search results may have created “initial interest confusion.” This offshoot of trademark law, which has been widely criticized and thought by many to be a thing of the past, arises when confusion arises early in the shopping process, even if the confusion is dispelled before the actual sale occurs.

The Ninth Circuit gave Amazon, and every other online retailer, an easy out from claims of this sort by repeatedly noting that “clear labeling” could avoid any confusion. In fact, the court unfavorably compared Amazon to Buy.com and Overstock.com, both of which informed consumers

that they did not carry MTM Special Ops watches. Interestingly, however, in what may be an act of passive aggression by Jeff Bezos, Amazon has not yet changed its search results or added additional labeling since the Ninth Circuit’s opinion issued on July 6, 2015.

It may be a stretch to conclude that this decision has implications beyond internal search engines run by online retailers such as Amazon, but one never knows – the case may have breathed life back into the moribund “initial interest confusion” doctrine, at least in the Ninth Circuit.