Surely, Google doesn’t want to go through what so many dominant companies in the U.S. have had to suffer – government antitrust scrutiny, in the form of merger/joint venture challenges and even, God forbid, a Microsoft-like monopolization suit.  For better or worse, intensive antitrust scrutiny is the price of success in the U.S., and while it can’t be avoided altogether, perhaps it can be minimized.  Or so Google hopes.

To that end, Google has made available a webinar entitled “Google, Competition and Openness.” Consumerwatchdog.org is not buying it, and their “anonymous mark-up” of the document (giving it a grade of “F”), is embedded from Scribd.com, below.

All of the news articles I’m seeing about how aggressive the newly appointed antitrust enforcers may be puts me in a mind to reminisce.

When I graduated law school in 1979 I went off to what was then called Howrey & Simon, at that time the self-proclaimed antitrust heavyweight of D.C., and maybe the entire country. We certainly believed this to be true, and maybe it was. Back then there was no American Lawyer, and no one was really keeping score.

At Howrey it was all antitrust all the time. The firm was involved in massive trials in distant locations – a four month trial in Houston, requiring the rental of suites of condos and an entourage that would challenge a U.S. President and staffed like the U.S. army — was not uncommon; in fact, cases like that were taken for granted. And, according my “law of antitrust litigation” (which is: all antitrust cases must be tried twice, < appeal, > appeal), some of these trials were “seconds. ” The funny thing is, no one seemed to give this state of affairs a second thought -it was just assumed that this was the normal course of events, and as long as Jimmy Carter was in the White House, all was well for antitrust lawyers.

This changed as quickly as the April weather in New England when Ronald Reagan took office – in fact, hiring at the DoJ Antitrust Division pretty much froze in November 1980 (I know, because I was interviewing there) If memory serves me right, many lawyers who were hired by the Antitrust Division during the interregnum between election day and inauguration day had their offers rescinded as soon as Reagan took office. Fortunately for me, I dodged that particular bullet – by then, I was headed back to Boston.

A long winter, an era of “anti antitrust,” had began. Government prosecutions — the lifeblood of many private actions — were shut down and new case filings became scarce. A firm like Howrey wasn’t able to ride the coattails of a government criminal action, or defend against either government cases or civil spinoffs, and the firm entered a period when it was “reinvent or die.” Howrey did reinvent itself, and thrives to this day, but a Dark Age of Antitrust had begun, and it was to last for twelve long years, while Reagan, and then George Bush, were in office.

This was a truly terrible time for U.S. antitrust hawks, but like the desert creatures that are able to hibernate for seemingly impossibly long periods of time waiting for rain, rain eventually did come, and the believers in aggressive antitrust enforcement rose to meet a new spring. Or so they hoped. The Clinton administration did revive antitrust (to Microsoft’s dismay, to mention one victim), but somehow it never got fully back on its feet in the eight years the democrats gave it. It takes a long time to recover from a 12 year dry spell, and eight years just wasn’t long enough. And, truth be told, Bill Clinton wasn’t as much of an antitrust hawk as some might have expected.  Times were good, and no one wanted to rock the boat too much.  And, antitrust economists had to grapple with the implications of the powerful network effects being created in the software and Internet industries.

Yes, there was some action, but nothing like the ’70s.

George Bush’s eight years in office put a quick stop to whatever momentum antitrust enforcement had picked up during the Clinton years. Price fixing prosecutions galore, sure, but not very much of the real thing: Section 2 cases, merger challenges, novel legal and economic theories that lawyers and economists could really sink their teeth into and spend a career arguing over.

So, now that Barak Obama is in office, what will the future hold? One never knows, and although history may rhyme, it never repeats. Google may prove to be a poor substitute for AT&T.  However, you can be sure that a new generation of anitrust lawyers has a careful eye on the Obama administraiton, waiting for a sign – a sign that their time has come. Again.

A new administration often means a new approach to federal agency enforcement of the antitrust laws.  And, a shift from Republican to Democrat often means more aggressive enforcement by the DOJ and FTC.  The business and legal communities want to know, what can we expect?

James W. Lowe and Thomas Mueller of Wilmer Hale attempt to answer some of these questions in their article Whither US Antitrust?, published in the March 2009 issue of the Global Competition Review.

A Blog Symposium, Hosted by Truth on the Market

Take a book: Innovation for the 21st Century, Harnessing the Power of Intellectual Property and Antitrust Law, by Michael A. Carrier.  Invite several IP and antitrust luminaries to comment on the book.  The result: a  “Blog Symposium” on the book organized by Truth on the Market.  The Symposium is described as follows:

The format will be as follows.Today we’ll have posts from Crane, Manne, Weiser, and Wright on aspects of Innovation for the 21st Century which focus on competition policy.Tomorrow, Professors Frischmann, Kieff, and Crouch will focus on the intellectual property related proposals.Professor Carrier will have the opportunity to respond to the posts Tuesday evening or Wednesday.And of course, we hope that both participants and our normal group of high quality commentators will find some time to mix it up in the comments.The participants have been given broad leeway to discuss general themes in Carrier’s work or hone in on specific policy proposals.

With the formalities out of the way, you can expect the first of Monday’s posts to start in the early morning and then we’ll add throughout the day with posts from Crane, Manne, and Wright.

Keep in mind that it wasn’t too long ago that the question “whether law profs could blog” without sacrificing all academic credibility and being pelted with rotten eggs by their more conservative colleagues was up in the air.

Click here to read the first entry and proceed from there.

Free The Market! by Gary Reback

Gary Reback, famed antitrust/IP lawyer and long-time thorn in the side of Microsoft, has written a book entitled “Free The Market!”.  The book will be released in mid-April and is available on preorder at Amazon now.

Based on a few excerpts on Reback’s web site it looks like this will be an anecdotal, “in-the-trenches” book (as opposed to theoretical/academic) that should be well worth reading for those interested in the antitrust/IP wars of the last two decades. Reback was truly in the center of most of the big cases during these years, and I hope his book captures the legal issues, strategies and behind-the-scenes events that he witnessed. 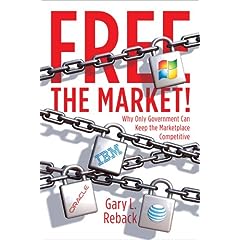