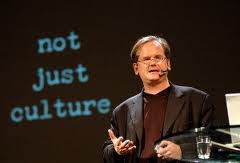 Harvard Law School professor Larry Lessig must have fallen off his chair in disbelief when he learned that Liberation Music, copyright owner of the song Lisztomania, recorded by Phoenix, had used the DMCA to force Youtube to remove the video of a lecture by Lessig that included video remix examples of this song.  He soon straightened up and filed what could become an interesting test case involving wrongful DMCA takedown notices and copyright fair use.

However, in the process he suffered something of a legal stutter-step that may come back to haunt him in this case. Assuming, that is, that Liberation Music doesn’t come to its senses and settle this case faster than you can say “world-renown copyright lawyer with deep resources handed slam-dunk case by naive copyright holder.”

The original “brooklyn brat pack mashup” video of Lisztomania, an amateur music video which remixes the song and scenes from the 1985 movie The Breakfast Club, has been the subject of countless amateur remixes (the “brat pack videos”) that are easily accessible on the Internet. Incredibly it is this very phenomenon — remixes of videos of this song — that Lessig has used in dozens of presentations* to illustrate the culture of creativity released by the Internet. And, implicit in his use of this example is that it is transformative, and therefore permissible under copyright fair use.

*Here is another one on Youtube that has not been taken down.  This lecture contains a 47 second clip of Lisztomania, as long as anything in the video targeted by Liberation Music.

Of course, in considering Liberation Music’s takedown notice to Lessig there is the question why so many full performances of this song remain available on the Internet while Liberation Music decided to

demand a take-down of Lessig’s  keynote address at a conference in South Korea. Lessig only played parts of this song, while many examples of the full performance  can easily be found on Youtube, seemingly untouched by a DMCA notice. This leads one to the conclusion that Liberation Music is either completely clueless or extraordinarily devious.

While it’s difficult to speculate about Liberation Music’s legal strategies, it is worth taking a quick look at the merits of Professor Lessig’s suit.

Is His Use Fair Use?  I don’t think there can be a serious question that Lessig’s excerpts from several of the brat pack videos, ranging from 10 to 47 seconds of a 4 minute song, qualify as fair use. I’m sure Lessig himself concluded this before he used them in his presentations. The videos themselves are transformative, and Lessig’s use of them in his lectures is educational and noncommercial. It’s difficult to imagine that they interfered with Liberation Music’s right to profit from the song. If anything, the meme that formed around these videos increased the song’s popularity and sales. Lessig’s position on this issue appears very strong.

Did Youtube Properly Remove the Video?  The Digital Millennium Copyright Act allows copyright owners to demand that an Internet service provider (such as Youtube) remove unauthorized copies of the owners’ works. Lessig posted the 2010 video on Youtube on June 8, 2013, and Liberation Music served a “take-down” notice on Youtube on June 30, 2013. Youtube took down the video and, as required by the DMCA, Youtube provided Professor Lessig with notification of this action. Lessig then took the next step permitted by the DMCA — he submitted a counter-notice contesting the claim of infringement. Under the DMCA, Liberation Music then had 14 days to file suit against Professor Lessig. If it failed to do so, Youtube was required to restore access to the contested work.

To show it was paying attention, five days after Lessig sent his counter-notice Liberation Music sent Lessig an email threatening to sue him. Two days later Lessig retracted his counter-designation, in effect folding his hand against what may have been a bluff by Liberation Music.  The video remains down, and properly so under the DMCA. Youtube reportedly receives millions of take-down notices a week, and its take-down procedure is largely mechanical. It’s not reasonable to expect Youtube to judge whether or not a work falls within the copyright fair use doctrine.

Why Did Professor Lessig Retract His Counter-Designation?  Why indeed? Why didn’t Lessig let Liberation Music sue him under the DMCA, as they threatened to do? Why did he retract his counter-designation and then, almost two months later, file an action for “declaratory relief,” asking the court to “declare” that his use of the brat pack videos was protected by fair use and that Liberation Music had served a wrongful DMCA take down notice?

While we  likely will never know the answer to this question, I

would expect Liberation Music to try to take advantage of this as a procedural matter, and argue that by side-stepping the procedures established in the DMCA, Lessig waived his right to sue Liberation Music. A quick search failed to find any authority either way on this question, but that doesn’t mean it’s a dead issue for Liberation Music. Congress constructed a precise system under the DMCA, the legislative history is extensive (and may address this issue), and Liberation Music may be able to persuade the Massachusetts federal court that Lessig’s retraction was a waiver.  After all, Liberation Music may have been bluffing — it could have let the 14 day period expire, and not filed suit, in which case the work would have been restored on Youtube and a lawsuit avoided. By withdrawing his counter-designation Lessig seemingly forced a lawsuit that Liberation Music may never have intended to pursue.

By the way, fans of Phoenix shouldn’t assume that the band is calling the shots on this. Maybe they are, maybe they aren’t. Like many bands, they have assigned the copyright in their songs to their publisher, and they may have no legal right, under their contract, to control their publisher’s enforcement of copyrights in their music. However, they may be really pissed-off, and making Liberation Music well aware of that fact.

Prediction: Liberation Music will settle this case quickly, and the video of Professor Lessig’s lecture will be back on Youtube before you can say “don’t make weak copyright claims against Harvard law professors.”

“If you’re going to pick someone to try and copyright troll, don’t pick the world’s foremost public intellectual on copyright issues. It’s rather like being a street mugger and picking the 6ft 4 broad-shouldered guy with a Marine tattoo.”

Update, March 2, 2014: According to this article on the Electronic Frontier Foundation web site (the EFF co-represented Prof. Lessig), this case has settled favorably for Prof. Lessig. The EFF states that Liberation Music will pay Lessig unspecified (and confidential) damages “for the harm it caused,” and quotes Liberation Music’s press release as follows:

This outcome was pre-ordained, but if Liberation Music’s takedown notice was a “mistake,” why did it take over six month to resolve the case?