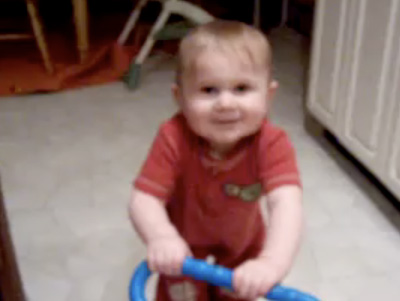 Lets Go Crazy! The Dancing Baby, the DMCA and Copyright Fair Use

It’s not often that a case involving a 29 second video of toddlers cycling around on a kitchen floor goes to a federal court of appeals, much less results in an important,  precedent-setting copyright decision. But that is exactly what happened in Lenz v. Universal Music Corp.

The cases arises from an issue inherent in the Digital Millennium Copyright Act. The DMCA allows copyright owners to request the “takedown” of a post that uses infringing content.

But, what does the copyright owner have to do to determine, first, whether fair use applies? Does it need to do anything at all?

This question has finally been decided by the Ninth Circuit in a much-anticipated decision issued on September 14, 2015.

The case had inauspicious beginnings. In 2007 Stephanie Lenz posted to YouTube a 29 second video of her toddler son cycling around the kitchen, with Prince’s song “Let’s Go Crazy” playing in the background. Universal sent a DMCA takedown notice to YouTube, but Ms. Lenz contended her use of the song was fair use, and therefore was non-infringing. Eventually the dispute made its way to federal court in California, with Ms. Lenz asserting that her use of the song was protected by fair use, and that Universal had failed to take fair use into consideration before requesting takedown of her video.

In this case Universal arguably failed to consider fair use at all.

The court does not answer the practical question now faced by Universal and others: what, exactly must a copyright holder do to show subjective good faith under the DMCA? Noting that it was “mindful of the pressing crush of voluminous infringing content that copyright holders face in a digital age,” the court described generally what appears to be a low standard to satisfy the “good faith” test. The court opined that subjective good faith belief does not require investigation of the allegedly infringing content. And, “without passing judgment,” that the use of computer algorithms appeared to be a “valid … middle ground” for processing content. However, the court failed to provide a standard for an computerized algorithmic test that might apply in the notoriously uncertain legal context of copyright fair use.

It seems difficult to conclude other than that this decision will increase the cost burden on the part of content holders who wish to use the DMCA to force the takedown of copyright-infringing content on the Internet. While the court provides little guidance as to what a copyright content owner will have to do to show that it exercised “subjective good faith” before sending a takedown notification, it seems likely that the ruling will involve increased human involvement, and perhaps even legal consultation in “close cases.”

This case was originally filed by Ms. Lenz in 2007, eight years ago, however it is far from concluded. The Ninth Circuit’s decision only sends the case back to the trial court for a trial under the legal standard enunciated by the Ninth Circuit. And, even that determination can only be reached after the court (or a jury) concludes that the 29 second video was fair use of the Prince song in the first place, an issue that has yet to be taken up by the court.

What, one might ask, can Ms. Lenz expect to receive in the event she prevails at trial? First, The Ninth Circuit decision explicitly allows her to recover “nominal damages” — in other words, damages as low as $1. However, even if she prevails and recovers only one dollar, she would be entitled to her costs and attorney’s fees, which could be a substantial amount, notwithstanding the fact that Ms. Lenz is represented by counsel pro bono.

Of course, given the economics of this type of case, its unlikely we’ll see too many similar cases of this sort in the future. Clearly, this was a “test case,” in which the principle, not monetary compensation, was the motivation. Not many recipients of DMCA takedown notices will bring suit when at best they can hope to recover nominal damages plus attorney’s fees.

For an earlier post discussing a decision on this issue by Judge Stearns in the District of Massachusetts, see Judge Stearns Weighs in on Legal Standard for Copyright Takedown Notices (Sept. 30, 2013).